The never-serious, hiliariously funny Andrew Weale asked me if I would follow in his footsteps on the blog tour. You know what? I said yes, but I realized there were no footsteps on the Internet and I had to follow mouse-clicks. Did cats know that? Imagine all the cats chasing the mouse-clicks looking for real mouse and finding me?

What am I working on? 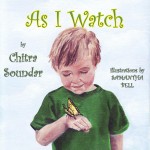 I’m always working on more than one thing. I have the attention span of a mosquito. That sounds horrible, I don’t bite people. I have the attention span of a butterfly. That’s better – maybe a pretty monarch butterfly. I love butterflies – that’s why I wrote As I Watch. Don’t cry mosquito, I love you too. You have bitten me so many times when I was growing up. I’d never forget you.

Anyway, I’m working on a picture book about a naughty monkey called Mandy. She gets all her friends into trouble and I think I’m going to call the book Jungle Splatter and the name of the jungle is – are you ready for this? This word is hard to say – but no matter, the bravest and the ones with the longest tongues can surely say this – Jamboree Jungle.

I’m also working on another forest. Not really. I am not a woodcutter or a forest ranger or a monkey myself. I’m working on a story about another forest about a character you would have never read about. There’s some weeing in this book and some sniffing. If you wee and sniff, Uck!

But the one book I’ve been working on for ages and ages and ages – like from the Ice Age till now (that’s why there’s a puddle under my table!!) is a chapter book about Aurora Watts. She’s this smart junior inventor (how cool, she has her own lab coat with her initials AW, actually it’s her Dad’s, his initials are also AW) who get a super-power. Ssssh, don’t tell anyone. No one is supposed to know yet. Oh wait, she loves crisps too. Her best friend and the best athlete in the whole world Jessie Scully knows about all her secrets, this one too. But no one else. Definitely not their arch-enemy Beatrice Beasley or her side-kick Floosie Fenchurch. You just have to wait for the book to come out to find out more. 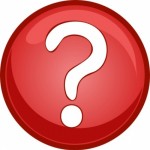 When is it coming out, you ask? Who knows! I need to find someone who likes the book so much they’d publish it and then they’d tell someone in China to print it and then they’d ship it all the way back here to Britain and then we can put it on the bookshelves.

How does my work differ from others of its genre?

Oh sorry, nodded off just there.

I think my books are different because there’s a little bit of me in my books. Jamboree Jungle (I just love saying that word), is filled with animals from India. A tiger and a crocodile and of course an elephant. You have to read the book to find out which one is me!

In Balu’s Basket, the boy is nice to everyone and most 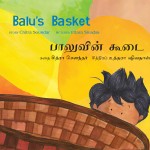 importantly he goes home to Grandma in the end. I was like that – I used to wander around the street I grew up in (those days you could do that, and everyone knew which house I was at). And then I’d always go back home to Grandma for dinner and a story. She told me lots of stories. 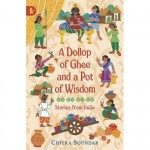 In a Dollop of Ghee and a Pot of Wisdom, the stories are from home. I heard these growing up. I wanted to tell the stories to others. 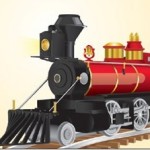 That’s one of the reasons I have started telling stories orally too. Check out my story website at http://thestorytrain.blogspot.co.uk.

The new book that’s coming out Farmer Falgu Goes On a Trip has lots of India in it too – dancers, a snake-charmer and an old man playing music. 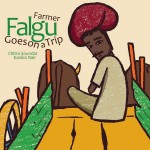 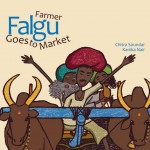 Farmer Falgu Book 2 will be

released later this year too. This time Farmer Falgu goes to Market. Not the super-market. The farmer’s market. But he has a lot of problems on the way.

How does your writing process work?

Not sure if it  works very well yet. I’m still learning. Need some more tweaking I think. Otherwise there would be a long list of publishers knocking on my door, demanding more books.

Wait, there’s someone at the door. Is it a publisher?

No! It was just the story spirit, she’s coming inside from her morning stroll. She knocks on the window if they’re closed. She decided to go out because you see, I’m writing this blog and not a story. So she kind of wandered off.

Because I’m a mosquito, sorry a butterfly, I sit on ideas like butterflies sit on flowers and then go to the next one. I have special notebooks – can’t write in any notebook I find. Can’t use any random pens I’m afraid. No danger of me stealing pens or notebooks – if I did , I would know exactly which shop I want to steal from. But then I’d be arrested. Of course then I’d have a lot of time to write, because I won’t have anything else to do.

I jot down ideas in many many places. I have a notepad hanging in the shower. Yes, shower. Doesn’t it get wet? Of course it does. Well, it might stay dry if I never took a shower. But then I would stink so much that the queue of publishers outside my door might run for their lives. So yes, I do shower every day (okay most days), and if I think of a bright idea in the shower, I note it down there. It was a birthday present from my darling sister who has a darling son (who is my nephew, who is yet to chew on my books, yet to read my books I mean).

I have a notebook in my bag all the time. I have a software in my phone, my ipad and on the internet which are all connected and I write ideas down in my phone or my ipad depending on which is closest to grab.

I wake up really really early in the morning when it’s dark. I like to surprise the sun and say Boo! when he comes comes out. I feel as if I am alone in the world at that time. The trains are still an hour apart (trains, you ask! Yeah, I live by the side of a railroad track, next to the first ever train-station built in London, which is no longer a station, just a plaque now.) 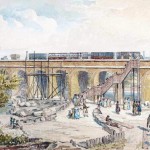 If I am working on a picture book, I write my idea down. Then I try to figure out if there’s enough of a story, then I try to do a storyboard. I can’t draw at all. Not even a straight line to save my life. If I’m taken hostage and if the man with the gun says “Draw a straight line and I’ll let you go,” I couldn’t do it. So let’s just make sure I don’t get into hostage situations with a man with a gun who wants me to draw.

I have a lovely online critique group who read my stories once they are ready to be shared with others. Then I revise, revise and revise. Who said grownups don’t have to revise? It’s not just for kids with exams. Writers revise all the time.

When I think the story’s ready to go out, I make sure it’s got its coat and hat on, it’s still nippy out there and send it off to publishers. Yeah, you see, if the queue of publishers were standing outside, I don’t have to send the story out in a coat and a hat. But alas, they haven’t still discovered my genius. They are queueing up somewhere else I’m sure. We are good at queueing here in Britain, aren’t we? Where I come from (which is India), queues are silly. We just jostle and jump, push and shove and somehow get what we want. And you know what I’d be totally happy if editors, publishers and agents want to jostle and jump, push and shove at my door. I’d give them all a story, no fighting required.

The thing about writing is – I have to do it so I don’t go crazy. Okay, fair point. So I don’t go crazier! I have always written I think – right from when I was 13 or 14. Before that I was telling stories, making them up. You can read all about it here. But I’d be homeless if I just did my writing and nothing else, especially with no queue outside. And hungry and a bit grumpy. Trust me, you’d be grumpy if you were homeless, hungry and with no money to buy the special notebook that costs ten quid.

I work in a bank, they pay me money for going in everyday and doing things they want me to do – like counting money, you ask? Whoa! Nope. They don’t let me anywhere near the money. I’ve been working in banks for 15 years now and I have never seen a bundle of cash or a chest full of money or a vault. I’m sure it’s somewhere but they wouldn’t show it to me. What I do is a bit more complicated than counting money. But then counting money would get complicated once it reaches 10,00,000 because I can’t count after 1 million. But I think if you work in a bank as a counter (not like a kitchen counter), counter of cash, then I’m sure they want you to be able to count beyond a million. Like what is 284848237472727171737373737. I don’t know. I have never had so much money that I needed to count it.

Anyway because I work in a bank during the day, yeah sometimes during the night, I have to write when I can. That means early in the morning, weekends, holidays (even during Christmas). I don’t write in the evenings. I can’t. My brain doesn’t work. Evenings are for reading, arranging my pencils, touching my new notebooks and smelling them, waiting for publisher or agent to call. Evenings are for meeting friends and going to shows.

Enough about me, you say. Fair enough. The next person on this blog tour is so unlike me. Don’t get ahead of yourself. She’s not normal either. While I’m terrified of animals, she’s a regular Dr. DoLittle. Sally Poyton was brought up in Oxfordshire in a home with menagerie of animals with everything from pigeons and parrots, to iguanas and goats.  Sally studied Art and Related Arts at University College Chichester, after graduation she worked as a professional artist; her works is in public and private collections around the country. Sally now lives in the rolling Chilterns with her family, and two mad Springbatts. (Sorry to interrupt, what is a sprintbatt?)  Sally started writing when her children were small; she has been honorary mentioned in the Undiscovered Voices Anthony 2012 and has made The Times / Chicken House Children’s Fiction Competition longlist twice; in 2013 and 2014! For fun she volunteers at an Indy bookshop. Queue up here to read her blog. She’d tell you all about it.