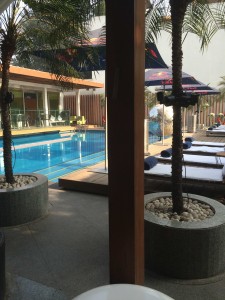 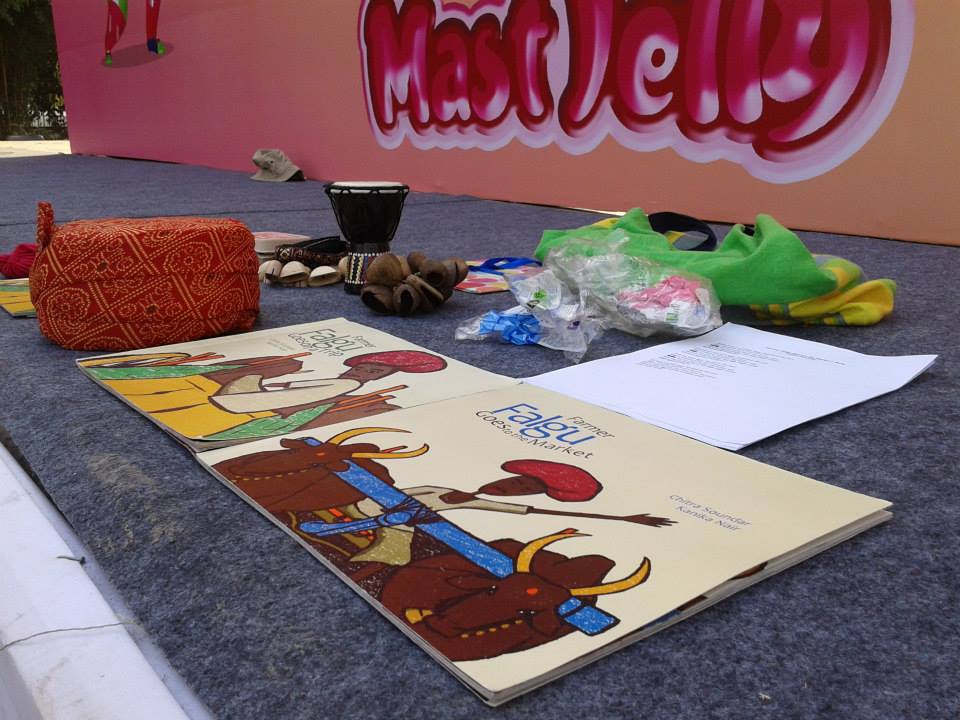 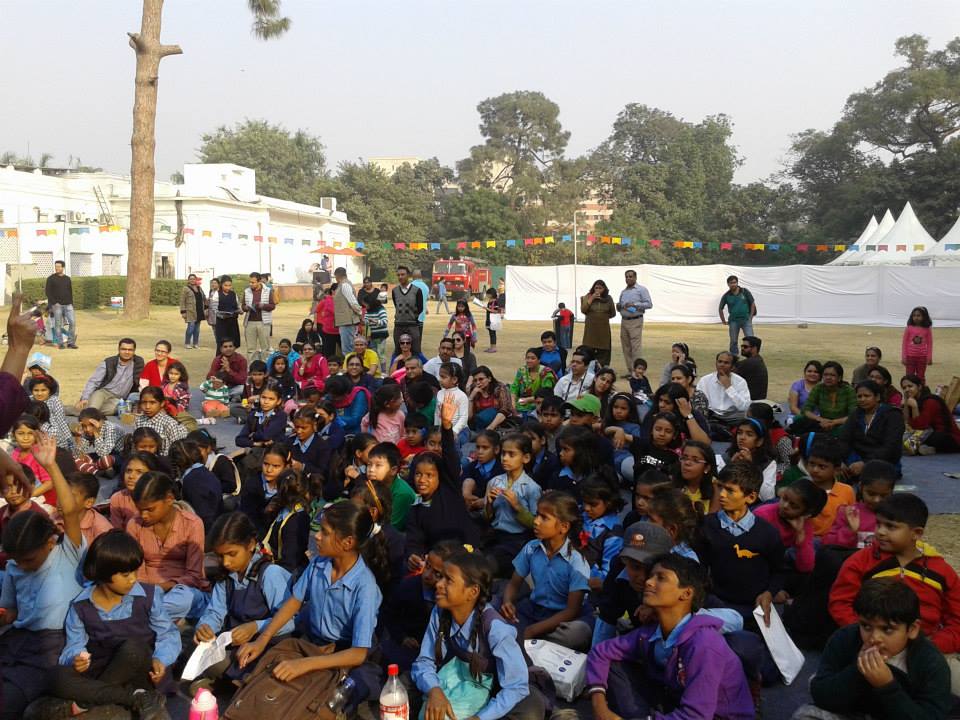 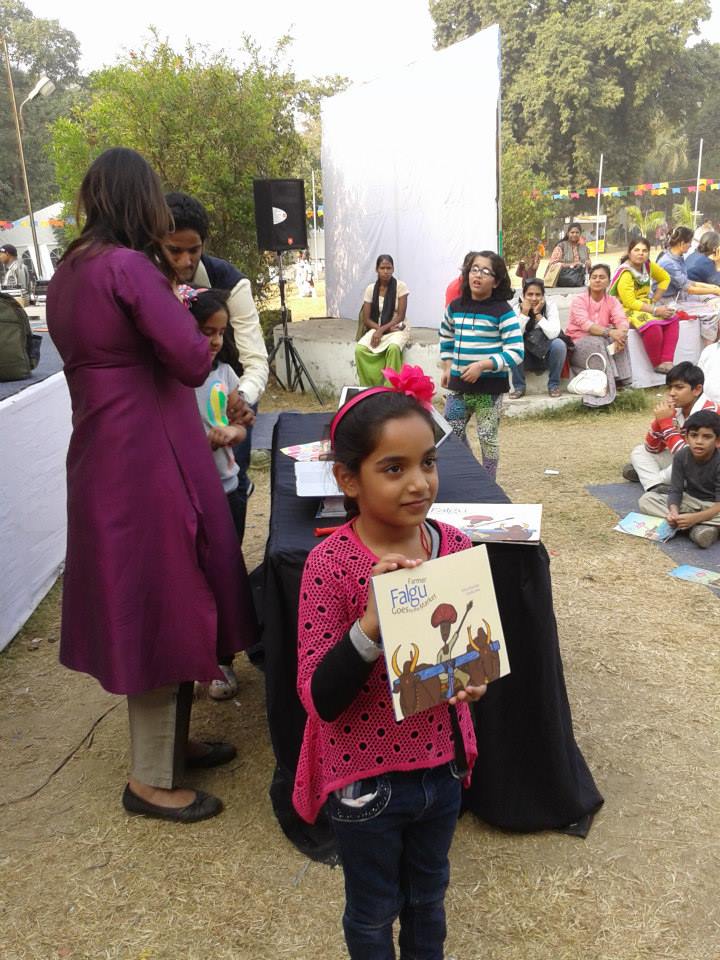 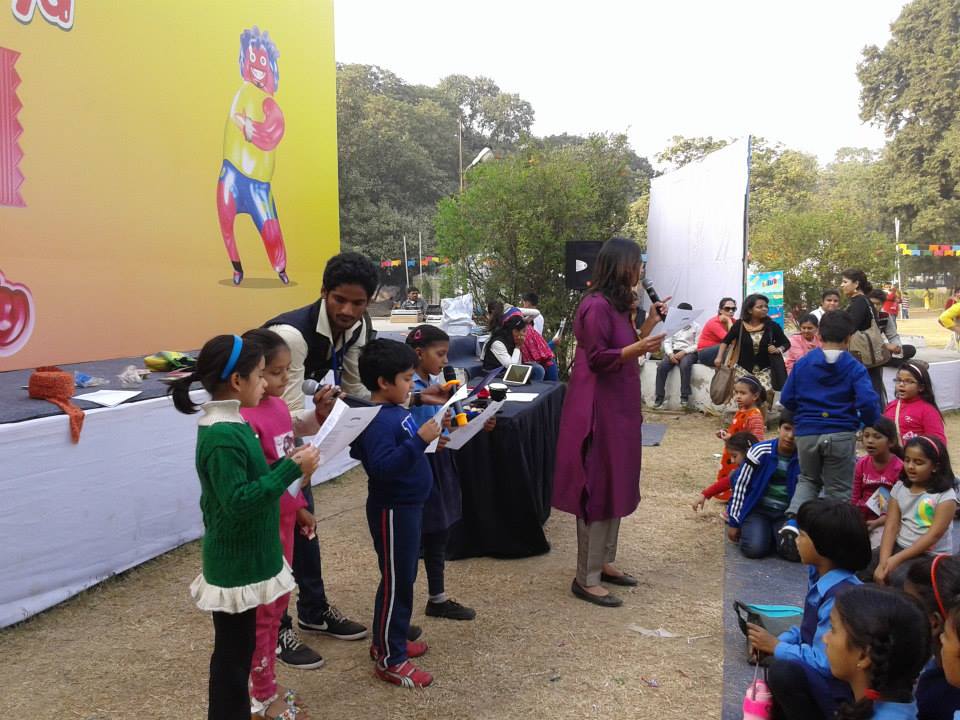 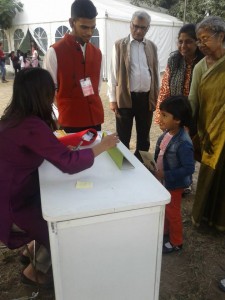 I’m new to Bookaroo! But I felt right at home the minute I walked in through the gates. I was a bit early – you can tell when I am over-enthusiastic that I couldn’t sleep longer and couldn’t hang around the hotel more.

The grounds were getting ready, volunteers were arriving and soon bus-loads of school kids were brought in and let loose amongst authors. 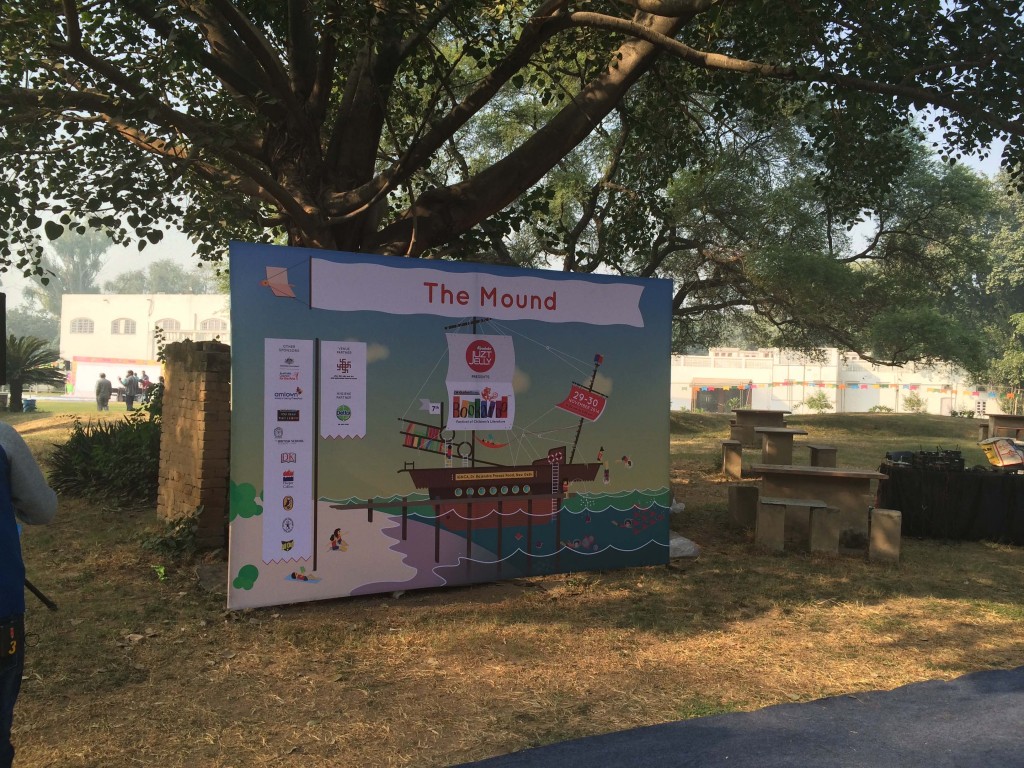 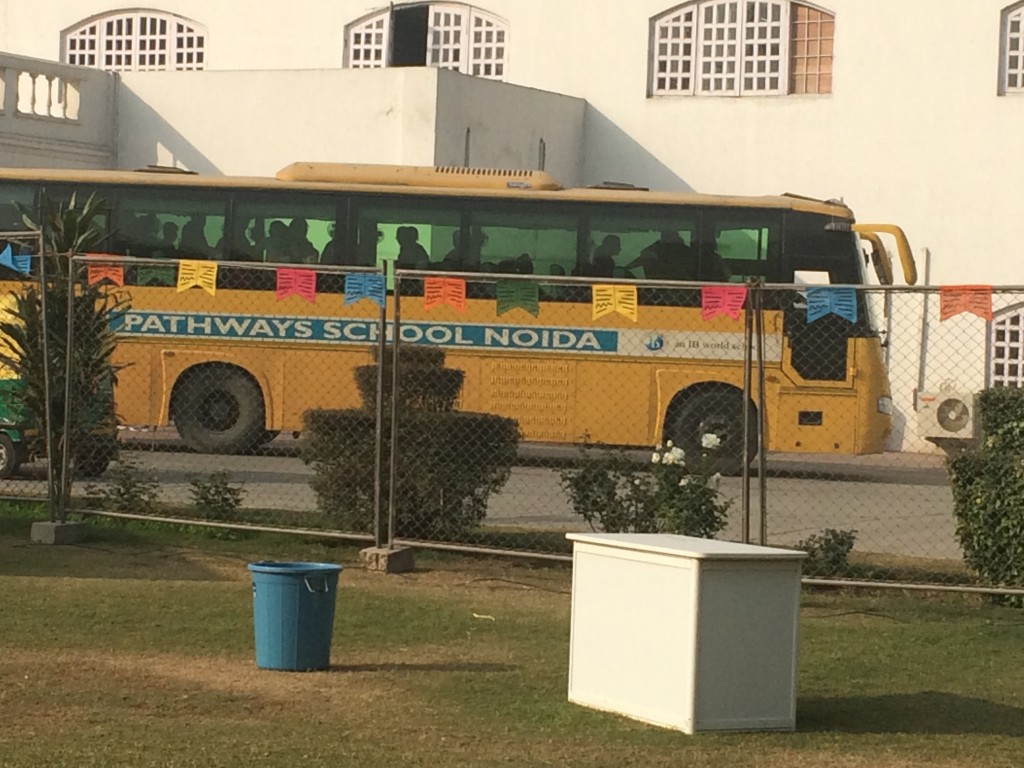 I had met some of the authors the previous evening at a SCBWI India event organised by Anushka Ravishankar of Duckbill books. And I met more on my first Bookaroo event day. 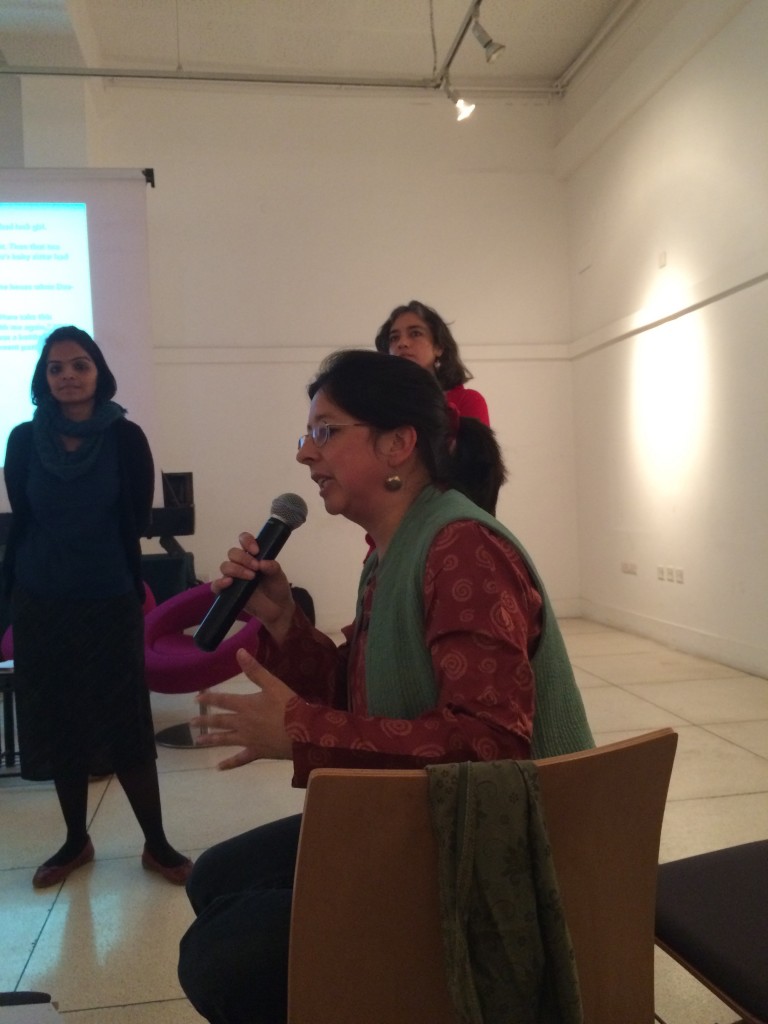 I met with Anita, the wonderful editor and publisher at Young Zubaan and met with one of the most wonderful illustrator Priya Kurian – the illustrator of Where is Gola’s Home?

I met writers and illustrators from India, Sweden, Australia, Germany, Singapore and of course UK too. A lot of names to connect with on Social Media and meet in future festivals.

I was thrilled and honoured to meet Eileen Brown and Jamila Gavin. I am proud to say Jamila even bought Farmer Falgu Goes on a Trip and I signed it for her grandkids.

My session was in an open space on the grounds and apart from the kids and teachers from the German school, I also had a visitor with feathers – an eagle. I had two wonderful volunteers who were so excited, they joined in eagerly. 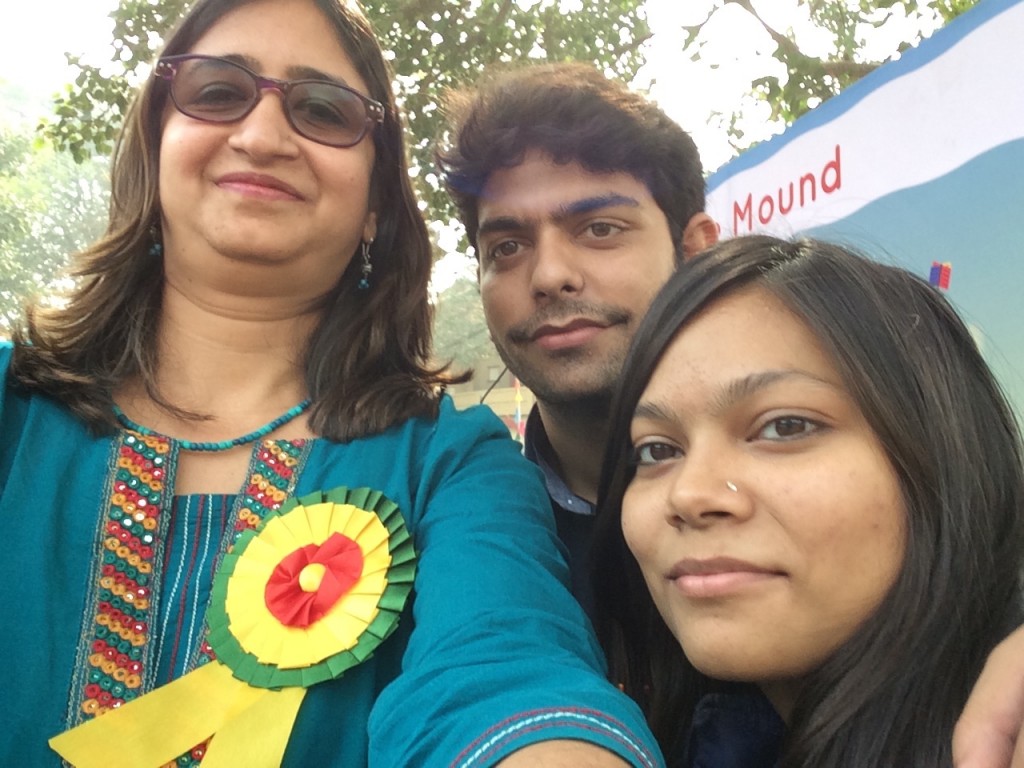 The session was filled with stories too. I told them the story of “catching the hound” from Mississippi and the Counting Story from India and of course Farmer Falgu paid a visit too and told them about his trip to find silence.

After a great lunch we all were packed into three cars and taken to see Old Delhi. We went through narrow streets, walked into old buildings, shamelessly took pictures of selling beads and old doors and brightly painted windows. 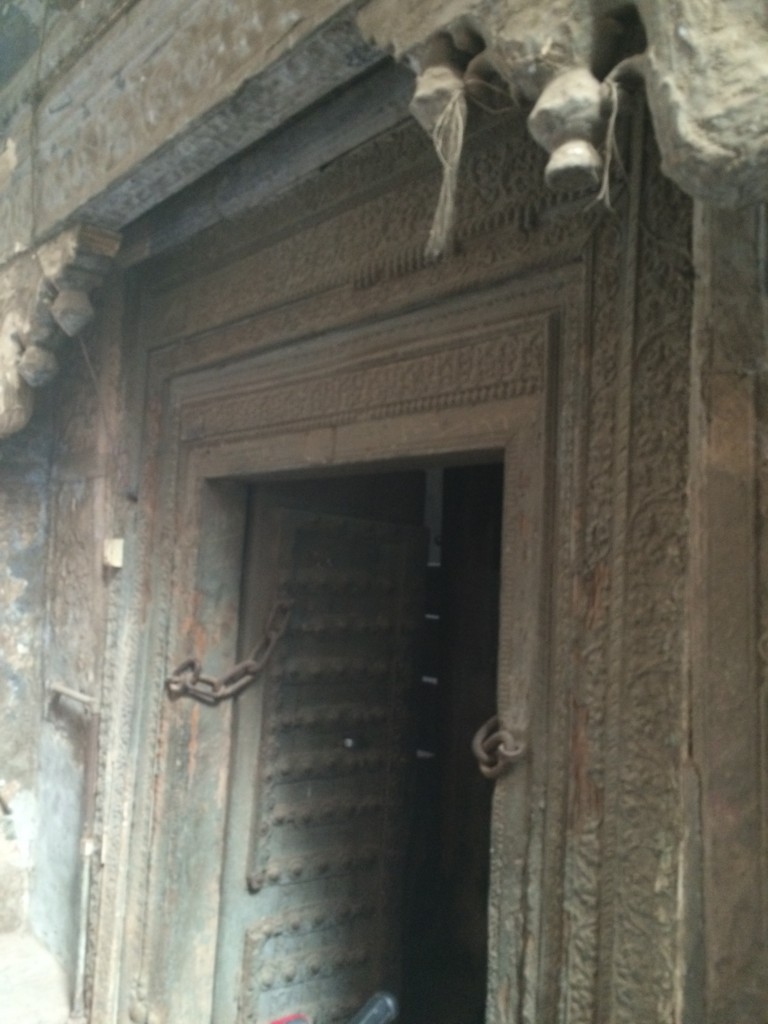 The street was filled with so many tiny shops and each shop was filled with millions of beads in hundreds of bags. Then we walked through a tiny street selling food where they deep-fried bread with fillings twice – and then went to the spice street. 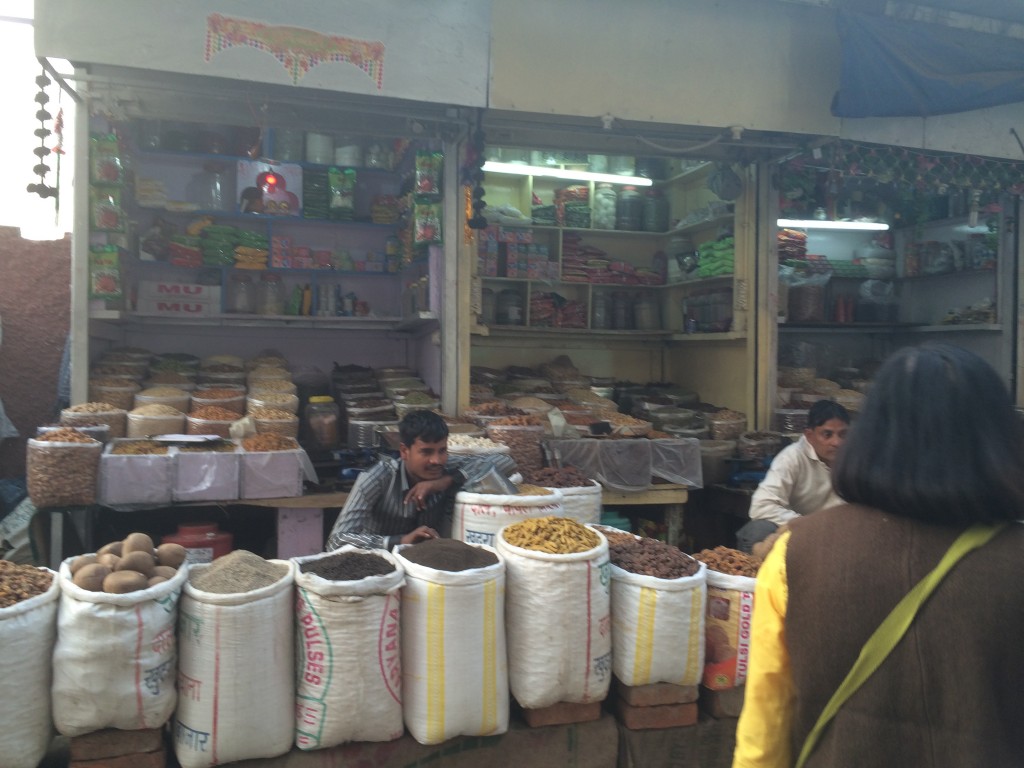 After inhaling a lot of smoke and spice filled air, we left the streets to the safety and comfort of our air-conditioned hotel rooms.

Day 0 ended with a wonderful party organised for all attending writers, illustrators, editors, publishers and sponsors.

Tomorrow is a special day. Farmer Falgu Goes to the Market will be launched at Bookaroo. I received my first set of copies on Thursday of the new book 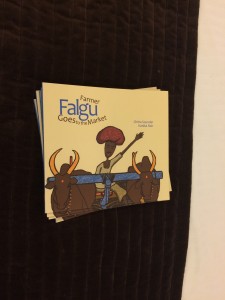 . More tomorrow after the launch itself. 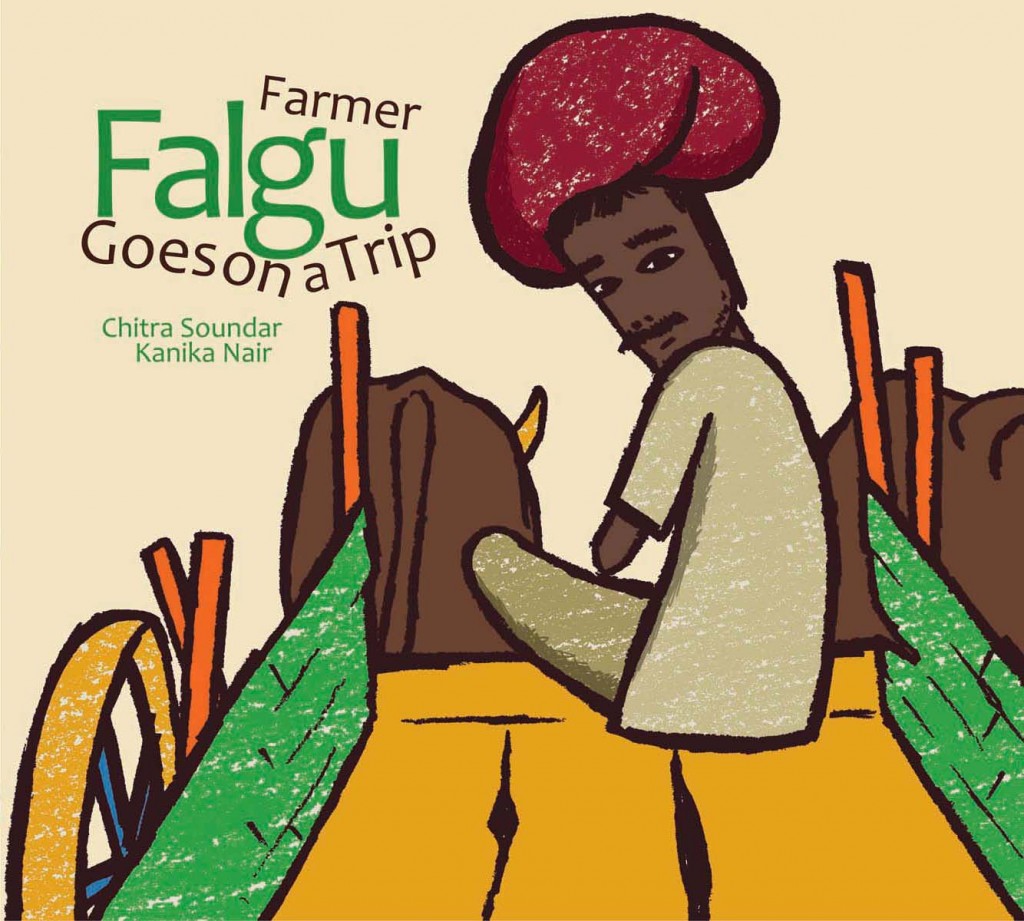 Farmer Falgu entered my life two years ago. He was inspired by John Burnigham’s picture books – three of them – all about journeys and unexpected companions during that journey.

I knew there is a story I wanted to tell – about travellers in India. Show the colour and sounds of India in a story about journeys. And Farmer Falgu had a perfect excuse – he wanted peace and quiet. He wanted silence.

In a completely different track, wanting silence and not finding was a theme I had been revisiting many years in a poem – I was in a remote farm during a workshop and I thought it was quiet at night. It wasn’t. I heard insects and birds, animals calling out, the night itself was filled with sounds of life.

I was writing this story on spec. For a publisher who specialized in audio-books. And I thought they’d appreciate music and sounds in the book. So every page had sounds and some opportunity for music.

Farmer Falgu Goes on a Trip was written, edited and accepted soon after by the wonderful Karadi Tales from my home-city Chennai. Two years later, here we are with a beautiful book – Farmer Falgu has come to life with Kanika Nair’s illustrations. He is now a farmer from Rajasthan with quiet wisdom and a positive attitude. We now know more about him than when I wrote it. I should thank Kanika and my editorial director Shobha Viswanath for that.

I’ve been writing for many years and once in a while I’ve had events organized by publishers for me. But my books were mostly launched in absentia as I write for publishers around the world. Even the book that was published in the UK was celebrated with a card. Mostly because I didn’t know better 6 years ago. I didn’t realize I could have done a launch party myself, like I did for Balu’s Basket last autumn.

Farmer Falgu is very lucky. He has Karadi Tales behind him. He has Shobha Viswanath for a champion. Shobha loves Farmer Falgu and his stories so much that she had planned a fantabulous launch event.

I was lucky to have been in Chennai for this launch. Right time, right place and a perfect launch for Farmer Falgu. 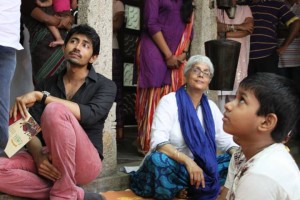 Firstly, Shobha had chosen a great venue where kids came in droves. Isha Life had the perfect ambience for storytelling – in an Indian summer, stories flowered and blossomed like the white mango flowers of the tree we were sitting under.

Then we had a percussion master for the storytelling. Murali was amazing with all his mini percussion instruments and his drums. He created Farmer Falgu’s world with his myriad of musical instruments. And then we had songs set to music by Viswanath who had less than an evening to come up with a tune and less than 10 minutes to show a novice like me how to perform it with him.
As I watched the programme unfold, I was nervous. I’m a writer. I sit in a study, stare at my computer and write for hours. Then I edit. I read aloud alone and I send it off.

I am an aspiring storyteller. I am slowly starting out and a long way to go before I’d call myself an expert. Definitely an amateur too. While I’ve been away 15 years working and living abroad, Chennai and Bangalore has turned into an oasis of storytelling. And here I am flying around the world to my home-city and finding that I’ve so many things to learn.

While I’m chewing at my nervousness, Shobha landed another surprise. She had invited a leading theatre and movie star Karthik Kumar. He has an impressive array of credentials in theatre and performance and here I was a quiet writer from London who had to perform in front of him.

So can I do what they want me to do? Can I join in? Can I sing? Can I keep the kids occupied? Will I let Shobha down? Most importantly will I let Farmer Falgu down?

I had invited friends and family to the event. Was I going to be the most remembered joke in my circles? 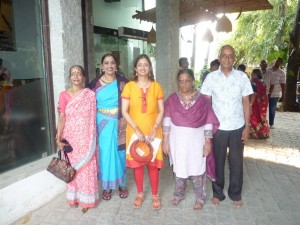 So there was no time to hesitate. I was the author. I wrote Farmer Falgu’s story. He was popular and I owed it to him to do the best I could. To do more than I had ever attempted to do.

As I stood at the mike, holding a big printed copy of the book, I realized I wasn’t shaking. I normally do in front of a mike. I was more focused on the music on my left, the kids in front of me and the parents (including mine) seated in front of me.

We had the music start us off and then we launched into a song. Admittedly I could have slowed down the song a bit and help the children join in. But as I said, it was the first time for this story to be told and many a lesson to be learnt.

We had song interludes from Viswanath and everyone joined in. We listened to Murali make exquisite music and then Farmer Falgu returned home happy just like the kids in front of us.

But the treat was not over. The kids were all loaded up into a bullock cart specially commissioned for the day and then they set off for a ride in the park just like Farmer Falgu went on a trip. The bullock cart was a big hit.

Here are some wonderful photos from the event.

That was the reward. That is the reason a storyteller tells stories – either orally or in written form. For it to make someone happy, to resonate with their own truths.

And you would think the day was over at that point. It wasn’t. The local city column of a national newspaper wanted to interview me and I had to thank Karadi Tales for that too. I did a phone interview with the journalist and in a day or two, there it was in one of the leading newspapers in India. 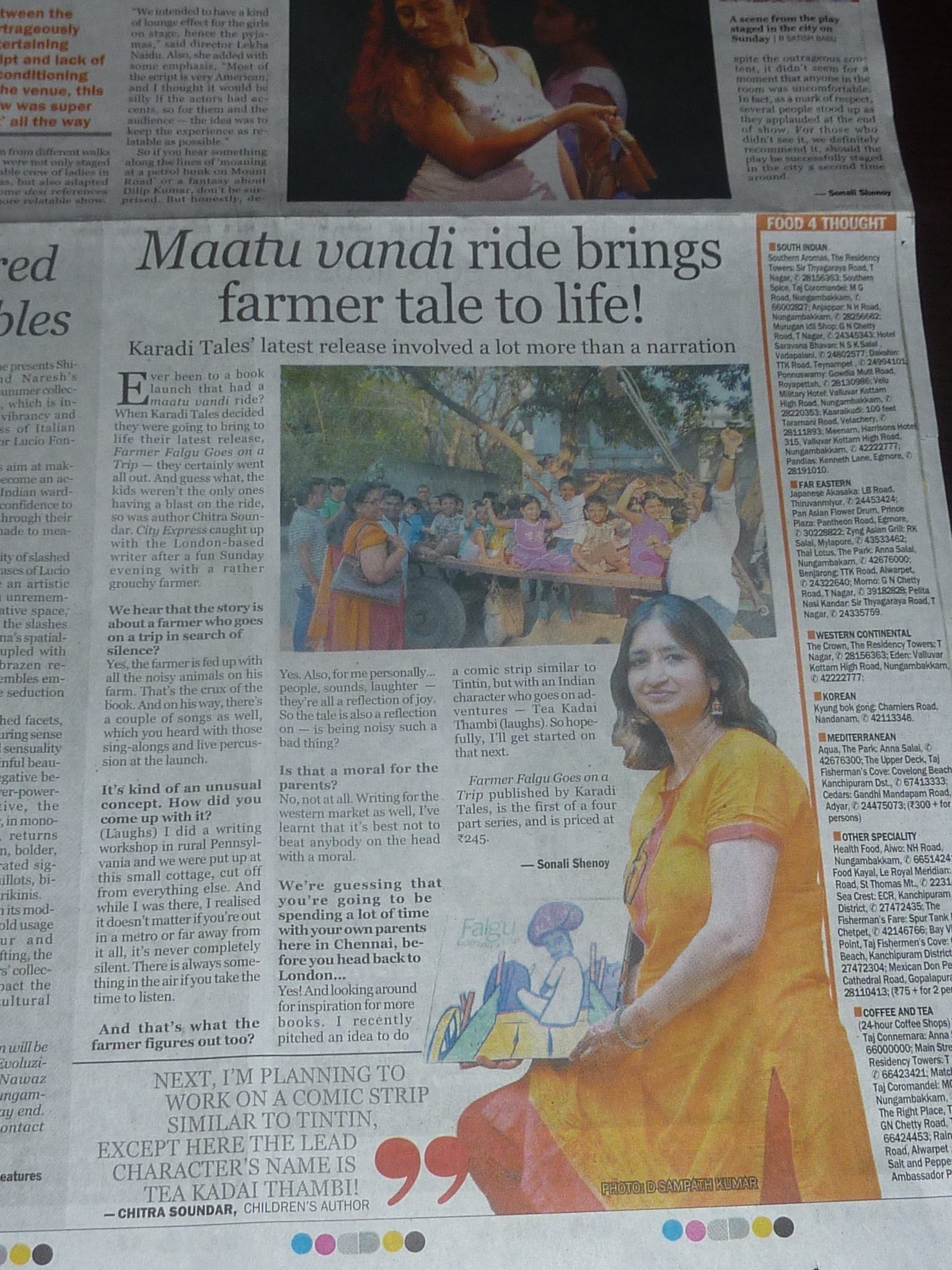 Farmer Falgu was welcomed amongst his fans with a lot of fanfare and music. I’m sure he’s going to stay with us and show us his quiet wisdom over the coming months and years.

And now, I am back in London and getting into my daily routine. But Farmer Falgu needs a reception back here in London as well.

So we are celebrating a London Launch on 18th May at 2 pm in Streatham Library in South London. Do not miss the event if you live in London. Farmer Falgu will be visiting and there will be cake too! 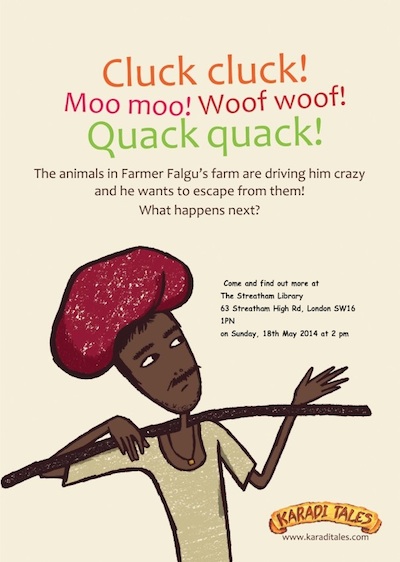