I grew up under the shadow of the caste system in India. Castes are ancient constructs that defined professional and social place in the communities. The primary division amongst the ancient Vedic communities 1500 to 500 BC was the Varna. And within each varna, the jathis were defined.

Varnas defined the social classes – the pyramid of our society back in India for thousands of years. Then of course were the people who didn’t even have a place in this pyramid. 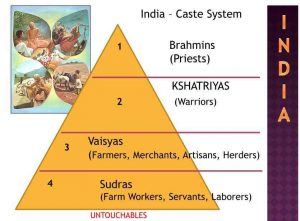 This original system of social strata is so embedded into the collective memory that even after years of struggle many communities still are marginalized and exploited.

Even today most people have either a school certificate or birth certificate that ticks either of these. FORWARD / BACKWARD / MOST BACKWARD / SCHEDULED CASTE / SCHEDULED TRIBE. Although I must say this is to level the playing field.

India is also a product of multiple imperial and colonial occupations right from the time when the indigenous people of the peninsula were brought under the conquering Aryans from the North West.

Both in the north and in the south (which was separated by the Vindhya mountains), communities existed in the hillsides and in woods and forests. These communities are sometimes collectively called Adivasis – the ancient people. Many of these communities for generations before and after Independence (from the British) either were deprived of their land (and hence livelihood) or forced to move to towns and cities to look for work.

Caste was part of our life in every sense of the world. While there were no social restrictions in the cities I grew up in, divisions existed based on caste, jathis and religions. Home to perhaps every religion in the world, most people learnt to live together in harmony except when politicans whip up the frenzy to gain emotional response. That was true for castes too. Traditionally South Indian politics (even today) is driven by caste and the divide between the “indigenous” Dravidian people vs the enforced caste system that came from the Aryans. The political parties flaunt their Dravidian credentials to gain votes.

The Irular community is a tribe that inhabited and still inhabits the mountain ranges of the south-west. These communities are nature loving and were tribes who lived off the land, nurtured it and cherished it. 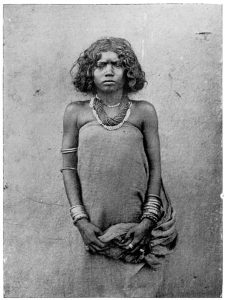 Their name, Irular, itself is a token of marginalization. Irul means dark in Tamil, one of the ancient languages of the world. Irular are people who are dark. While the tribes from Tamilnadu, the state that I belong to, are proficient in trapping venomous snakes and rats, the ones from Kerala are farmers. Today they would be classified under SCHEDULED TRIBES, whose tribal way of living has been sacrificed at the altar of development and modern politics.

Nowadays many of these families come into towns looking for construction work – given forests are being destroyed and the old way of life seemingly impossible. Even in the cities and towns, they often live in shanty towns and slums, looking for hard labour in construction and other industries.

One such legend is that of Pattan’s, the elder of the ancient Irular community in Kerala. Set in the valleys of the Sahayadri mountain ranges, Pattan’s Pumpkin tells the story of Pattan and his wife living in harmony with nature. One day he finds a bottle-gourd plant. 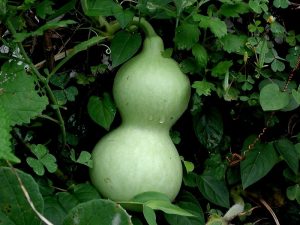 He replants it, nourishes it and the plant bears a fruit that grows and grows. Before Pattan could enjoy the juicy bottle-gourd, rains begin to lash against the mountains. For days the rain fell causing distress to animal and plants. Pattan must save his community somehow.I’m sure you have spotted already that the cover shows a pumpkin and not a bottle-gourd. That’s because I’ve taken some artistic liberty to change the bottle-gourd into a pumpkin as it is a familiar fruit to imagine. The brilliantly talented Frane Lessac has brought it to life with her vibrant pictures. 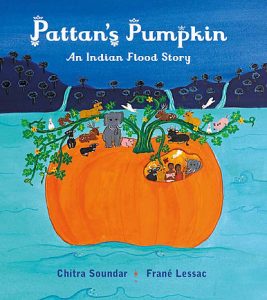 I stumbled upon the story of Pattan in the research notes gathered by Philipose Vaidyar. I tracked him down to find out more about the story. And the journey began. I researched the Irular community, and my Dad scanned copious notes from the bowels of the Connemara Library, watched videos of their modern-day issues, read about the gorgeous mountain ranges they lived in.

For me, telling the story of Pattan symbolises many  different things.

The story is a story of conservation and responsible farming that Pattan practiced thousands of years ago. Living one with the land, looking after other animals, birds and other living creatures including a bottle-gourd plant shows how ancient communities lived in harmony and highlights how we forget to look after the natural world around us. 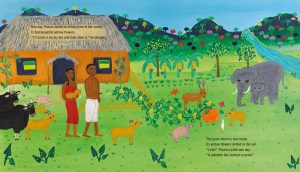 The story is not just another flood story. It is about embracing a world where we accept and celebrate differences amongst fellow human beings and appreciate the differences in our ways of life. It is about the duty every human has to protect, transform and grow the natural world around us.

It is about a kind man who decided to save his community from the floods with ingenuity and quick thinking. It is a story from a community that has faced enormous hardship. Bringing a positive story from them to the world stage would open the window into their beautiful world.

Find out more about the power of stories especially about unheard voices and tell us about your own favourite books that celebrate differences and promotes understanding of the world.